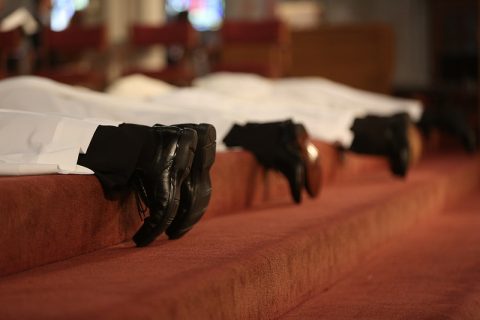 (ACMPress) WALLA WALLA – The Diocese of Walla Walla ordained seven men as official Church greeters at the Cathedral this past Sunday, becoming the first U.S. Catholic diocese to extend the Sacrament of Holy Orders to that position.

“I’m honored and humbled to have received this blessing,” Sal U. Tayshun told ACMPress afterward. “This is what can happen to anybody who follows the promptings of the Holy Spirit.”

Tayshun said he first felt the vocation while attending grade school. “I made sure I was always first into the classroom, so I could welcome my classmates, going up to them, greeting them, saying ‘It’s so wonderful you came today! Welcome!’ It’s my charism, I guess. Getting beat up every so often was worth it.”

Men discerning the call attended a week-end retreat to explore whether the desire to greet was a true calling from God, or simply an innate need to be the center of attention.

“Some guys were too aggressive in their greeting style,” said Hal O’Thare, another of the seven newly ordained. “You can’t go running into the sanctuary after people you might have overlooked, or somehow snuck by. A brisk walk, maybe, but definitely not running.”

After discerning their true calling, the ordinands attended six months of seminary and Dale Carnegie training.

“It was anything but easy,” O’Thare said. “And we’re not priests, we know that. It’s just great being recognized by the diocese for our important role in welcoming people to Mass who, for the most part, would rather be left alone.”

One thought on “PARISH REPORT: Diocese of Walla Walla First in Nation to Ordain Church Greeters”