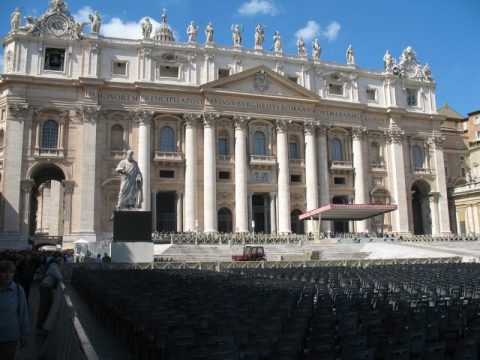 If Dan Brown is the king of Catholic conspiracy theories, with his Da Vinci codes and whatnot, then director Timothy Alberino of “True Legends” documentaries, is the court jester. Have you seen this? Apparently, the Vatican has been suppressing pre-flood historical evidence of…pre-flood history thingies?

Oh, and the Church is preparing humanity for the return of our alien overlords.

Those who control the past control the future and no organization on Earth has a tighter grip on the official history than the Roman Catholic Church.

Timothy Alberino, director and host of the new documentary ‘True Legends: The UnHoly See‘, discusses evidence that the Vatican is behind a vast cover-up of pre-Flood history.

They’ve connected the dots and now present evidence of Vatican’s long plot to cover up the history of the pre-flood world and, at the same time, prepare humanity for the arrival of their space Masters, which will bring in a different gospel.

While recent history has shown the Church is capable of covering up some stuff (coughSexAbuseCrisiscough), covering up thousands of years of history – history predating the founding of the Catholic Church, even – well, that’s pretty hilarious, if you ask me.

If you watched his interview at the link, Alberino claimed he has proof the Church has direct ties to the ancient pre-flood Sumerian dynasty. His proof? Brace yourselves, guys, this is huge. Turns out their priests wore fish-shaped head-dresses out of reverence to their fish-god Dagon, and Catholic bishops’ mitres are kinda fish-shaped. I KNOW!!

Episcopalians wear mitres too, by the way. As well as the Anglicans. Hey, you know what? Maybe they’re directly linked to the Sumerians too. ‘Pisc’ in Episcopal is just like ‘pisces’, and angler, which you can see in Anglican, is another term for fisherman. Proof, man.

Oh, and a giant man wearing loincloths and wielding a huge club was killed by US Special Forces in 2002 in Kandahar, Afghanistan – 12-15′ tall, over 1000 pounds, lived in a cave. A descendant of the ancient Nephilim, doncha know.

Anywho, if you want a laugh and decide to watch the interview, you’ll notice it was filmed prior to the 2016 election, and Alberino predicted Hillary was going to win the presidency. Seems like he can’t get anything right.

Final Question: If the Vatican is so adept at controlling history, and has such a tight grip and all, how is this guy is still selling his documentaries? You’d think an organization with that much power would have squashed this like a bug. Right?

One thought on “Oh Noes! The Vatican Is Controlling History!!11!1!!”